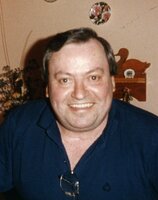 It is with heavy hearts that we announce the peaceful passing of William James Wilson in the loving arms of his family at St. Marys Memorial Hospital in St. Marys, Ontario on Thursday, August 19, 2021. Born in Ballymoney, Co. Antrim, Northern Ireland on August 10, 1938 to the late William James Wilson and the former Agnes Gault. He was employed at Dominion Controls as a welding and fabrication technician for almost 30 years. Bill was a former member of the ANAF Unit 261 and the Independent Order of the Odd Fellows. He was an avid bowler and self-taught musician, playing the snare drum in several marching bands. His harmonica jigs, reels, ballads and laments were appreciated by many family, friends and long term care residents over Bill’s lifetime. Beloved husband of Nancy Hunter, whom he married on September 30, 1961, five years after he immigrated to Canada. Bill mailed Nancy -his one and only love- an engagement ring and Nancy then emigrated from Ireland to Canada in 1958. Adoring father of Jody and Jeremy Eaton of St. Marys and Jackie and Sean Hall of Stratford. Cherished Grandad to Nathan, Kiara, Tyson, Jacob, Rylan and Aislinn. Bill was predeceased by his sisters Winnifred Dooey and Kathleen Connolly as well as brother-in-law Billy Preston. Bill was also predeceased by his in-laws Robert Taylor Hunter and Margaret Ann (Douds) Hunter as well as sister-in-law Martha O'Neill, brothers-in-law David Hunter, John O`Neill, Sammy McLaughlin, Tom Tomlinson and Allen Milligan. Bill will be remembered with love by his brothers Raymond and wife Pearl and Norman and wife Marie as well as his sister Doreen Preston, all of Northern Ireland. Bill is also survived by his sisters-in-law Margaret Tomlinson of Vancouver, Violet McLaughlin, Maisie Milligan and Rosaline Hunter of Northern Ireland, many nieces and nephews and close friends in both Ireland and Canada. In keeping with Bill’s wishes, cremation had taken place. Bill’s life will be remembered and honored with a private family service at a later date. Remembrances may be made in the form of a donation to the St. Marys Healthcare Foundation through the Andrew L. Hodges Funeral Home, St. Marys, Ontario.