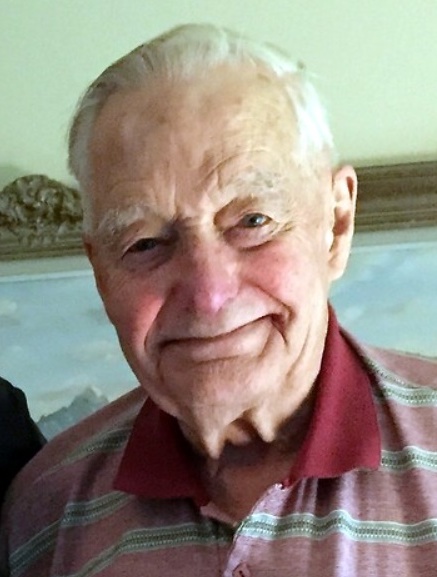 As per Ray’s wishes there will be no funeral service.

Raymond Allen “Fid” Fowler passed away peacefully, age 93 at home on Monday April 4, 2022 with Pat, his loving wife of 68 years by his side, and a loving and supportive family surrounding them both.

Ray was born June 28, 1928 to the late Edward and Margaret (Jones) Fowler in Stratford Ontario. He moved to St. Marys in 1947 and worked at Richardsons Foundry making bulk milk tanks and vats for John Labatt Brewery, among other things. He later changed jobs and worked for St. Marys PUC as a lineman for several years.  The lure of “being his own boss” took hold and in 1966 he purchased Taylor’s Esso Station and operated the garage until he sold it in 1979 and “semi-retired” to a maintenance job at the St. Marys Arena.

Over the years Ray involved himself in the St. Marys community. He was a volunteer firefighter with the St. Marys Fire Dept. and was involved in the building of both the old Water St. arena and the new arena at the Pyramid Centre through the Minor Hockey Association. His love of hockey had him coaching the PeeWee team for 13 years and being involved with the St. Marys Lincolns. The highlights of his hockey days were winning the All Ontario Championship in Goderich with his 1965 PeeWee team and working with the 1962-63 Championship Lincolns team. “Fid” was honoured to become a Life Member of St. Marys Minor Hockey .

Dad dabbled in farming with his Hereford cows and a few sheep, enjoyed a variety of hobbies (woodworking and caning), and was our “Mr. Fixit” whenever we needed him.

Several trips with family and friends were enjoyed over the years and Arizona, Australia, Florida, Hawaii and Hong Kong were highlights.

Ray was predeceased by his brothers Stanley (Dorothy) and Melvin (Alice) and sister Doreen (Bob) Hislop.

As per Ray’s wishes there will be no funeral service.

In lieu of flowers, donations to St. Marys Minor Hockey Association or the Stratford General Hospital Foundation’s “In Our Hands” Capital Campaign would be appreciated.

Share Your Memory of
Raymond
Upload Your Memory View All Memories
Be the first to upload a memory!
Share A Memory