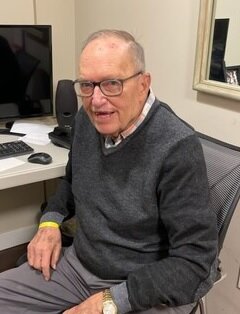 A private family funeral will be conducted  A graveside memorial service will be held in the spring at the Kirkton Union Cemetery.

James “Jim” Bearss, 85, formerly of Exeter, passed away peacefully on December 9, 2022, with family by his side.

Proud grandfather of nine grandchildren and five great-grandchildren, with another on her way.

Jim began his career as a farmer, focused on mixed farming. From there he developed J.Bearss Machinery his own farm machinery business, sold farm real estate, and was a trusted salesman working for various farm businesses throughout the years. Later in life Jim was well known for his column with the Exeter Times, writing the ‘Senior Perspective’ keeping Seniors apprised of upcoming events, available resources, and providing them with a joke or two.  His personal contribution to the Senior Community gained him recognition as Exeter’s Citizen of the Year in 2004, an honour he was very proud of.

A private family funeral will be conducted Click here to veiw a video of the service.

A graveside memorial service will be held in the spring at the Kirkton Union Cemetery. Memorial donations may be made to Diabetes Canada, or the charity of your choice.

Share Your Memory of
James
Upload Your Memory View All Memories
Be the first to upload a memory!
Share A Memory