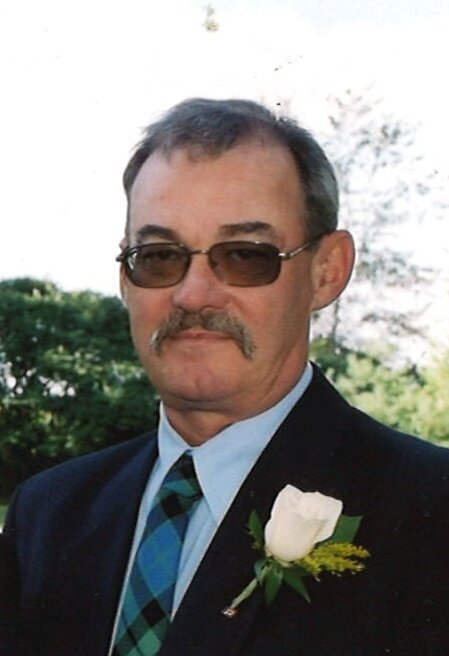 Join family and friends on Sunday, September 11th, 2022 from 1-4 p.m. at the family home, 23017 Nissouri Rd, Thorndale for an informal gathering, to honour and remember Doug. Please come and go as you are able. Light refreshments will be served.

Douglas Franklin MacKay of Thorndale passed away from cancer in the arms of his loving wife at home on July 9th, 2022 in his 75th year.

Doug will be missed terribly by his best friend, constant companion and loving wife, Lois (Elliott) MacKay.  He was the extremely proud father of Kylie (Ike Vanderweg) of Arva, and Craig (Amy Stevens) of Port Stanley.  For the past seventeen years, his two grandchildren Caelan and Camden MacKay of Port Stanley brought him great joy and happiness.  He proudly attended Camden’s hockey and ball games and watched with pride at Caelan’s drama and singing performances and art presentations.

Music was Doug’s passion, first as a trumpet player with the St. Marys Marching Band, where he met Lois.  They have since marched in step together for over 56 years!  He also played for a number of years with Andy Hoe’s Dance Orchestra.  Later, he learned to play the bagpipes as a nod to his Scottish heritage.

Doug loved his career as an elementary school teacher and even after retirement he continued to teach for twelve more years.  As a teacher, he was an active member and eventually president of the OPSTF.  At the schools where Doug taught, he would integrate musicals into the curriculum and along with the music teachers, they produced many excellent musicals, which students enjoyed whether acting, singing or building props.  For every Remembrance Day, Doug played the trumpet at his school’s Assembly.

Doug had a real sense of adventure and he and Lois loved to travel.  They spent a year teaching in Australia where their daughter was born.  They travelled extensively from coast to coast in Canada, most of the states, Mexico, Costa Rica, most of South America, the Caribbean Islands (especially Cuba), and all the European Countries, including Russia.

Doug had a love of classic cars and spent decades with his friend and mentor KB Lindsay (2018) repairing, sanding and painting old cars.  Doug’s most recent classics were his ’59 Cadillac, ’57 Pontiac (just like his 1st car) and ’49 Ford truck.

Join family and friends on Sunday, September 11th, 2022 from 1-4 p.m. at the family home, 23017 Nissouri Rd, Thorndale for an informal gathering, to honour and remember Doug. Please come and go as you are able. Light refreshments will be served.

The family wish to say a big Thank You to the staff and nurses of HCCSS and the Saint Elizabeth Nursing Agency, and Dr. Foster of St. Marys Medical Clinic for their professional and supportive care so Doug could stay at home with family.  Also, a heartfelt Thank You to friends and neighbours, especially Kirsten, Marc, Chris, Bonnie, Bob and Linda.

Share Your Memory of
Douglas
Upload Your Memory View All Memories
Be the first to upload a memory!
Share A Memory